Listbestandroidgames.com – Attila the Hun was one of the greatest leaders of the Huns. What else can you say about a man who had an empire that stretched from Kazakhstan to Germany.

His conquests forced the Franks to retreat to France, the British to England and he was the first in 800 years to succeed in humiliating and causing great trouble to the Roman Empire. 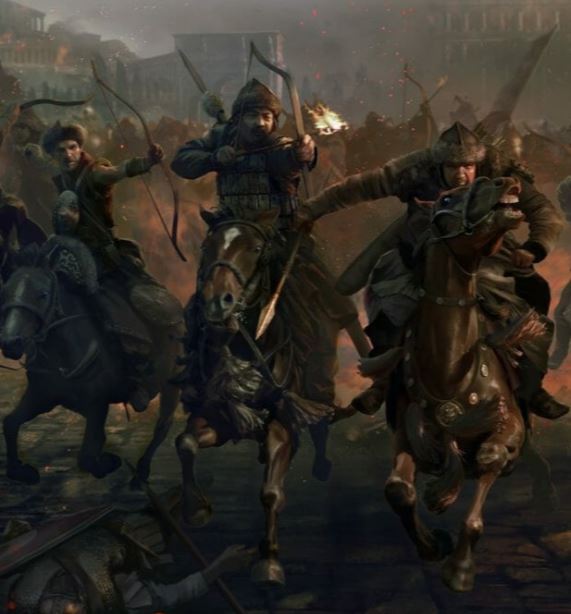 So, if you are going to create a game focused on an ancient warrior…. there is no other better option… isn’t it?

According to the tradition of its predecessors Total War Attila is a turn-based mix of strategic campaigns with real-time tactical battles.

It was a winning form for 15 years, but in this latest release, Creative Assembly added a few extra things, creating the best campaigns in Total War.

The most interesting change reappears from a Rome Total War expansion – barbarian cultures may abandon their localities to form nomadic hordes.

If you play in “Horde” mode, the armies become mobile cities, and you gain the ability to recruit new troops on hostile territory, but you may have security problems in terms of the economy.

Converting your settlements into Hordes is a very good option, especially if you are in a war that you cannot win, but if you are not careful and do not manage them carefully you can have rebellions.

Another plus, which seems to have been taken directly from Crusader Kings 2, is that they put a lot of emphasis on political intrigue.

In Total War Attila, Creative Assembly offers what is probably the most robust political system of all TW versions to date.

Individual characters develop over time, and even if they all follow the same system of progress, each can develop its own unique traits. personality, such as: trade relations and moral bonus if they are leading an attacking army.

Managing all these different characters is surprisingly enjoyable, but the leader must find a balance when it comes to politics – if you get too involved you can run out of political influence, if you do too little your subordinates will revolt.

The political system can add quite a bit of fun to the game, but it’s a shame that the interface leaves something to be desired.

Creative Assembly didn’t do much to introduce the game system to new players, and the interface often fails to show you important things, which means that for the first few hours of the game, you realize all the options. possible, you will be in the fog.

I finally turned my head, but not before my inept leader provoked two civil wars.

Strategic gameplay is what you’d expect from a Total War game: satisfying, but not nearly as well balanced as a “real 4X” like Civilization 5.

To give them credit though, it seems like Creative Assemblies have made AI pretty good, and this can be seen when you play against the computer, the AI ​​attacks with numerous weapons which does not allow you to destroy it bit by bit.

The diplomatic ai also seems to have improved, with clans suing you for peace, signing trade treaties and sending armies to help allies (you can’t find these things in a Total War game so far).

The AI ​​was insignificant in previous TW games, but Attila seems to have received a considerable improvement.

Even though the new content and AI are so nice, there are two big issues in Attila that need to be mentioned.

First of all, the review build has some problems that make the computer crash at least once an hour. Secondly, the time between laps is very poorly thought out.

At one point it took the AI ​​3-4 minutes to go through the clan badges list. The average time would be about 2 minutes, but you still have the impression that it’s an eternity, especially when you don’t know if your game will crack before you can play.

Let’s hope that the people from Creative Assembly will fix these problems after the launch as they usually do.

If the strategic gameplay fulfills its functions, the tactical battles are remarkable. Fighting speed has been improved, making units stop pausing after a few seconds of fighting.

This is crucial because it gives you enough time to experiment with special abilities or move units to positions they can flank.

The list of changes is too large to list all here, but this unit upgrade will delight anyone who has been unhappy with previous units.

It’s actually quite difficult to find major problems in terms of tactical fighting, but I have to mention that the version I played was a bit unbalanced.

Normally now I should also talk about the game’s graphics, but let’s be honest – we’re still talking about TW – the graphics are spectacular especially if you have a PC that you can play with all the settings given to the maximum.

So let’s talk about a great audio design instead. There are many additions – such as the speech of a general before the start of the battle, which is announced with trumpets – but the music is the one that stands out.

Each tribe has its own soundtrack, and each is adapted to the traditions of the culture they belong to – with the Germanic factions you hear drums and chants all accompanied by Morin Khuur (a type of violin).

The whole atmosphere it creates is fantastic, mixing exactly the right mystery and aggression becomes a soundtrack that I will listen to with great pleasure in my free time.

Now, let me answer the big question I’m sure you all have: Is Total War Attila a better game than Rome 2 was at launch? Absolute.

In fact, many additions to Total War Attila seem to be the improvement over the shortcomings in Rome 2. The AI ​​is smarter. The UI is much better.

The battles are slow enough to give you a chance to try other fighting tactics. The list could go on and on, but one thing is for sure: Total War Attila is a damn good strategy game, without having to compare it to its predecessors.

Additional Notes: You must know if this game unsupported graphics chipsets for some NVIDIA GeForce such as 9 series, 300 series, Quatro series and AMD Radeon series such as HD 4000, HD 3000 or Radeon HD 2000 series.