RaiderZ Review– Raiderz is an MMO that has been waiting for quite some time, especially since it is free to play. At first glance, the game resembles in some respects TERA and especially Monster Hunter.

Regarding the availability of the game, you can rest assured because it was released in both the US and Europe but the development team is still deciding whether to apply an IP block or not. 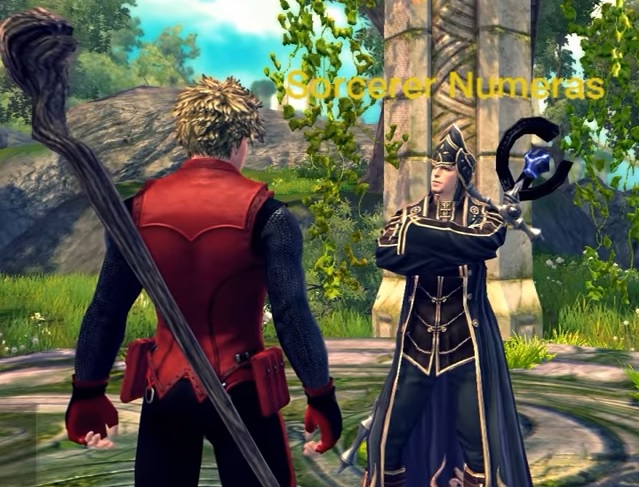 I had direct contact with Frogster staff in the past and they were open and willing to collaborate even if they had bad luck here and there with a few less successful titles but my overall opinion is that they are Germans and Germans like well done things. .

Like any gamer, I started by visiting the official site and reading a few posts on their forum to get an idea of ​​the community and the number of active players. I was pleasantly impressed by the site which is based on simplicity, but they exaggerated a bit with it because the FAQs are missing – a big minus (it shows a lack of interest towards visitors).

Another big downside of the game is that it has only one race and is completely missing the archery class (I’m a big fan and I was somewhat disappointed with the discovery). With all this shortcoming, the character customization panel is complex which gives a note of diversity.

The story is another minus. It seems that Frogster has decided to apply a lot of shortcuts to launch the game so it is missing.

The graphics of the game are well done, it resembles in many ways Forsaken World, which is not a bad thing at all, on the contrary. I decided to stress my GT 440 and with all the details to the maximum I stayed at 30-40 fps.

The interface of the game is very “clean”, maybe a little too clean … it could have put a few more ornaments but as I said, many shortcuts. The functionality is similar to many games, namely it can be accessed via hotkeys or the Escape key. The menus offer multiple easy-to-access options. For example, the social network window has the tabs “party”, “guild” and “friends” which makes it easy to navigate and especially to find the players that interest you.

The chat receives a plus from us because it can be customized to show exactly what interests you. However, they omitted something essential, namely the possibility to invite players to the chat party. There are also a number of commands available but you will not find them in any tutorial or help.

There are four classes:

The action of the game is very fluid, the xp system is designed so you don’t have to do a lot of grinding, so my advice is to stick to quests. There is even a “lock target” system activated by the Y key but I did not understand exactly how it works and that I put all the complicated things in the “uninteresting” section, the game must be fun not to bother you so a useless feature .

In the upper left corner you will notice the three bars: HP (health points), EP (enrgy points or hand) and SP (stamina points).

The regeneration system of these three “consumables” is a very interesting one. Interesting is a word that does not do justice to the system because you will immediately notice how unbalanced it is. While EP and SP regenerate relatively quickly, HP will give you headaches. I will not spoil your surprise, I will leave you the delight because I was unpleasantly surprised.

As for the rumors that there would be no restrictions on classes, they are totally unfounded because you receive a skill point per level and you have to choose the tree where you put it. The best solution would be to document yourself as well as you can, to choose where you want to go in the end game and eventually to use the reset button you receive at level 15 so as to reorganize your skills in a efficiently.

As for the xp, as you grow the quests become fewer and fewer but the reward is commensurate. Unlike other games, Frogster has added an interesting element of killing monsters. Some quests require you to kill them with flour bags or a monster weapon, which added to the fun. We meet here the same preoccupations of the hunter / gatherer character that the world got a little bored with but it is a “must have” nowadays so maybe we would have given it a minus if it didn’t have it.

After level 17, you would do well to have friends as the game becomes somewhat repetitive through courts and dungeons, but the solution for single players remains the beam.

You can craft all the items you need in Raiderz: armor, weapons, gems, buff items, etc. The materials can be found either on the map or in the form of drops in the courts / boss.

After level 18, crafting rare items requires only instantly obtained ingredients like most games. Unlike the competition, the drops are individual and not shared, which is why crafting is not so difficult.

Exploration is an option that gives players the opportunity to gather the materials needed for crafting through various tools: harvesting plants, mining, breaking trunk locks. In order to have access to these tools you have to complete some quests of course.

Classes are not limited to a single set of weapons and armor, but if you want to increase your chances of success, my advice is to stick to class-specific items.

Experiments with equipment that are not recommended for the class you have decided to go to will most likely be a failure as the game is not designed for hybrid builds so you have every chance to wake up making your hero more vulnerable than him. you improve.

Some items have sockets where you can put gems, I still haven’t found out if it has to do with the chance of a craft or if you can add sockets later.

The only advantage I found in the guild is the warehouse … otherwise it is useful to gather your friends in one place. Maybe in the future they will work on this aspect as well.

If you hope this game is PVP, you will be disappointed as it has a PVE character. PVP is allowed only by duel and only in certain areas such as MT. Eda.

To be honest, it was a pleasant experience although I was expecting more starting with TERA. Overall RaiderZ a pleasant and exciting game if you are a bit of a PVE fan. Let’s not forget that most games start from the idea of ​​PVE and then work on PVP, but let’s hope that Frogster won’t stop here.That’s all about RaiderZ Review.