After the first hours of the game, I was pretty sure I would hate Frozen Cortex Game. Nothing seemed to go the way I wanted, every match was getting worse, and my opponent, AI, seemed to have a special pleasure in finding holes in my defense. If I wasn’t forced to play this game longer to finish this review, I probably would never play it again. 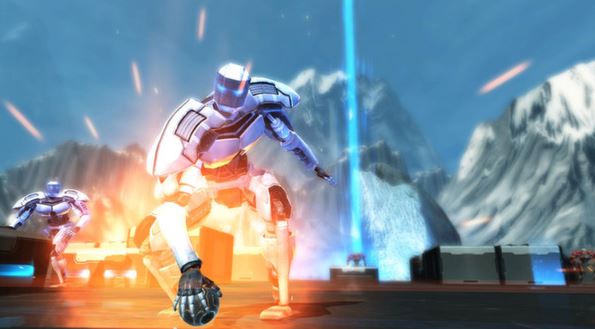 I’m so glad I didn’t do that. After learning to play it, I realized that Frozen Cortex is one of the deepest strategic experiences on the PC. I thought it wasn’t worth playing, but I was wrong.

The sport in Frozen Cortex is a distant cousin of American football, with fewer players, faster, where two teams are made up of 5 criminal robots each. The sport, known in fiction as “Cortex”, is played for 5 seconds each time.

The coaches give commands that do not exceed 5 seconds, then both teams execute them simultaneously. After the 5 seconds or after a major event (pass, interception, etc.) both coaches can adapt, issue new commands, and start over.

Simultaneous turned-base mechanics are unique in strategy games of this kind, and also worked excellently in Frozen Synapse released in 2011. If Synapse was focused on close-quarters fighting rules, Frozen Cortex Game boils down to tactical decisions and application. to an original sports war simulator.

Leaving aside the war parts makes the tactics in the Frozen Cortex feel more important and more refined. In Frozen Cortex there are no war gadgets like “flasbangs” or missiles, and without these gadgets that explode everything comes down to geometry: angles, vectors and cattle.

Unfortunately, if we take the war part out of the calculation, which had rules that were quite easy to intuit, it also gave me another thing that I had to learn, and that contributed to my first games that were horrible.

The tutorial in Frozen Cortex contains only the basic rules of the game and nothing else, so I had to learn and feel the rest of the options on my own skin:

Worse, single-player campaigns only include standard matches such as tournaments and seasons, where the difficulty is locked to “standard” and each match affects the income you have available for the rest of the season.

More than once I planned my game on a corner, doing all sorts of maneuvers until I could get a perfect pass – but every time I forgot that the one who has the ball can’t run back or that only three passes are allowed per round. We lost the first match 27-0 and this score makes it sound better than it really was.

In the end I managed to find where I can play some matches against an “easy” AI. After I found this training place, Frozen Cortex changed for me. I found out where I was making mistakes, and ironically, Frozen Cortex here shows its true genius.

While planning your moves, you have the ability to preview the next 5 seconds. During the preview the players can throw, run, block but the opposing team remains motionless if you don’t tell them what to do. This is the key: in order to plan effectively, I also had to give simulated orders to my opponents, then plan how to stop these attacks.

Now, for those who are always thinking 3 moves ahead, this option from Frozen Cortex will seem a bit trivial, but for me it’s like a religion. I’m not a long-term strategic thinker, but Frozen Cortex bombarded me with lessons like this until I started to adapt.

Even though Frozen Cortex offers a lot of options in single-player mode, the real fun is in the multiplayer arenas. Finding a match is quick, and if you get bored of waiting for an opponent to move, you can enter several matches at once.

In addition, Synapse’s play-through-email system has been reintroduced. Enabling email notifications allows you to connect, send game strategies and you can see more urgent matters. When you receive an email from us, you connect and see the damage done.

I didn’t pay much attention to this option the first time I met it, but I came to appreciate it. Playing by email is a great way to play with friends who don’t have a lot of time or if you want to do several things at once, such as writing a review of a game.

It took me a while to like Frozen Cortex Game, but once I realized how it works, it started to turn me into the tactical thinker I always tried to be. Frozen Cortex taught me to be the man who thinks three moves ahead, and it’s a feeling I didn’t get from any other game.